Scottie Barnes is No. 4 in your program, but No. 1 in your wallets.Barnes, the sensational sophomore who has averaged 15.7 points, 7.2 rebounds, and.. 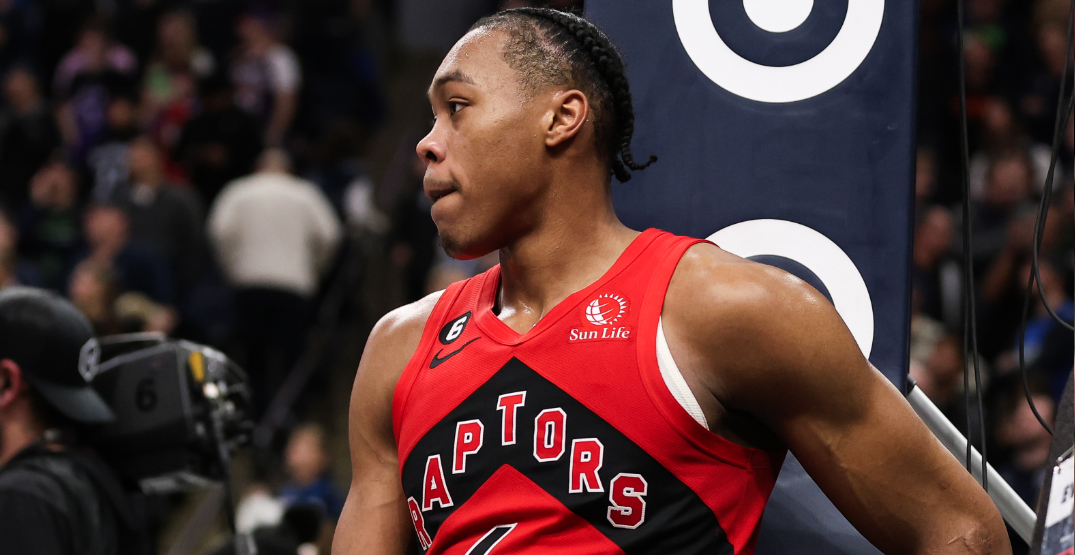 Scottie Barnes is No. 4 in your program, but No. 1 in your wallets.

Barnes, the sensational sophomore who has averaged 15.7 points, 7.2 rebounds, and 4.7 assists per game this season, leads all NBA players in jerseys sold in Canada, according to NBAStore.ca.
The NBA and the National Basketball Players Association announced the top jersey and team merchandise sellers for the first half of the 2022-23 season on Friday.
To no surprise, the Raptors rule Canada.
Barnes has the top-selling jersey in the country, followed by Toronto teammate Pascal Siakam, who is averaging 25.1 points per game this season. Stephen Curry of the Golden State Warriors and LeBron James of the Los Angeles Lakers rank third and fourth respectively, with the Raptors’ Fred VanVleet holding down the fifth spot.
Toronto owns team jersey sales up north, too.
The Raptors are the best-selling team jersey, followed by the Lakers, Warriors, Brooklyn Nets, and Milwaukee Bucks. Toronto didn’t, however, calculate into the top 10 in global team sales, with the Lakers and Warriors locking down the top two spots.
No individual Raptors player ranked within the top 10 either, with Curry and James taking the top two spots.

Here are the top-selling NBA player jerseys in Canada for the first half of the 2022-23 season, according to NBAStore.ca:

Here are the top-selling NBA team jerseys in Canada for the first half of the 2022-23 season, according to NBAStore.ca:

What was the Raptors first game?

The Raptors hosted their first ever regular season match against the New Jersey Nets on November 3, 1995 at the SkyDome. 33,306 fans were in attendance to watch Alvin Robertson score the first points in franchise history. The Raptors defeated Nets in 94-79. Contributions from Damon Stoudamire (10 and 10 assists), as well as Robertson (30 pts) were key.

How long have the Raptors been a team?

Toronto Raptors are an NBA NBA franchise. The Raptors were an expansion team to the NBA in 1995 along with the Vancouver Grizzlies. In 2001-02, the Raptors became the only Canadian-based NBA team after the Grizzlies moved to Memphis, Tennessee.

Toronto Raptors: The Raptors play their home games in Scotiabank Arena. The Maple Leafs, a city's NHL club, also uses the arena. Since their inception in 1921, the Raptors have played in the NBA playoffs thirteen times. Their most recent appearance was in 2021 when they were defeated in six games by the Philadelphia 76ers.

The Raptors made their first playoff appearance in 1999-2000. In the first round, the Raptors were swept by New York Knicks division rivals.

The team was boring and there were very few fans. There was not much to be excited about and nothing to cheer for. After years and years of failure, the team decided it was time to change. They went to great lengths to appeal to the masses.

The team hired an advertising agency to help them create a national marketing strategy in 2001. Using creative thinking, they devised a slogan, "Hear us roar."

The slogan was used to promote the fact the games were sold out. All they needed was a catchy phrase and a great logo to go along with it. This is where agency's creative genius shines. They combined the expression "hear us roar" and another popular saying, "never die." This became the Toronto Raptors' official motto.

The team is owned by Maple Leaf Sports & Entertainment (MLSE). MLSE also has the NHL's Toronto Maple Leafs as well as the MLS's Toronto FC and CFL's Toronto Argonauts. They also own the AHL's Toronto Marlies and Toronto Rock lacrosse team.

When was the Raptors' first playoff series won?

Toronto beat New York 3-2 to win their first ever playoff series. This was the first time that Toronto had reached the Eastern Conference semifinals since Lenny Wilkens' tenure as head coach.

How was the first year of existence for the Toronto Raptors?

It was difficult for the Toronto Raptors to make it in the NBA's first season. Isiah Thomas became GM and hired Brendan Malone as head coach of the new Raptors franchise in 1995, and the team soon acquired several talented players in the draft and through trades. They lost to the Chicago Bulls one time that season, but they ended up with a 21–61 win-loss record overall.

In 1996, Toronto drafted Marcus Camby, who became Rookie of the Year and formed part of the starting line-up with Alvin Williams at point guard. Damon Stoudamire was traded later in 1997. Toronto made more roster changes over the years to ensure future success.

Despite all of these changes, the team struggled through its first few seasons in NBA. Toronto made its first playoff appearance in 2000 after years of rebuilding and transition. However, it lost the series to New York Knicks.

What is the name of the Toronto Raptors' mascot?

The Toronto Raptors were founded in 1995 as an NBA team. They play their games at Scotiabank Arena.

Raptor, the giant red dinosaur that is the Raptors' symbol of loyalty, is Raptor. Raptor, who was introduced in 1995, entertains his fans with his acrobatics as well as slam dunks. He makes regular appearances in Toronto to support community projects and charities. In 2019, he received the NBA Mascot of the Year award for his many years of service to the Raptors organization. Raptor has become a familiar figure in Toronto as well around the NBA. He is also an internationally recognized symbol of Canada’s basketball fandom.

Many in the country and throughout the city share Raptor’s enthusiasm for his team as well as its fans. Raptor's leadership has made the Raptors one of the most popular teams in the NBA, winning the 2019 NBA championship. This win was a significant milestone for basketball fans across Canada and Toronto. Raptor continues being a source to pride for all Raptors. Raptors pride will continue to be strong as long as he's here. Long live the Raptor! Go, Toronto Raptors!

Toronto Raptors games usually take place during the weekdays between October and April. Weekends are usually reserved for concerts and festivals.

When visiting a Toronto Raptors game, the most popular day to attend is Wednesday. Many fans show up early for pregame warmups.

Fans move on to Nathan Phillips Square after the game. It is located next door to ACC. They remain there until the final whistle.

Raptors we the northScottie Barnes