Boston Celtics forward Jayson Tatum has been listed as out for Saturday’s contest against the Toronto Raptors due to wrist soreness, the team said on .. 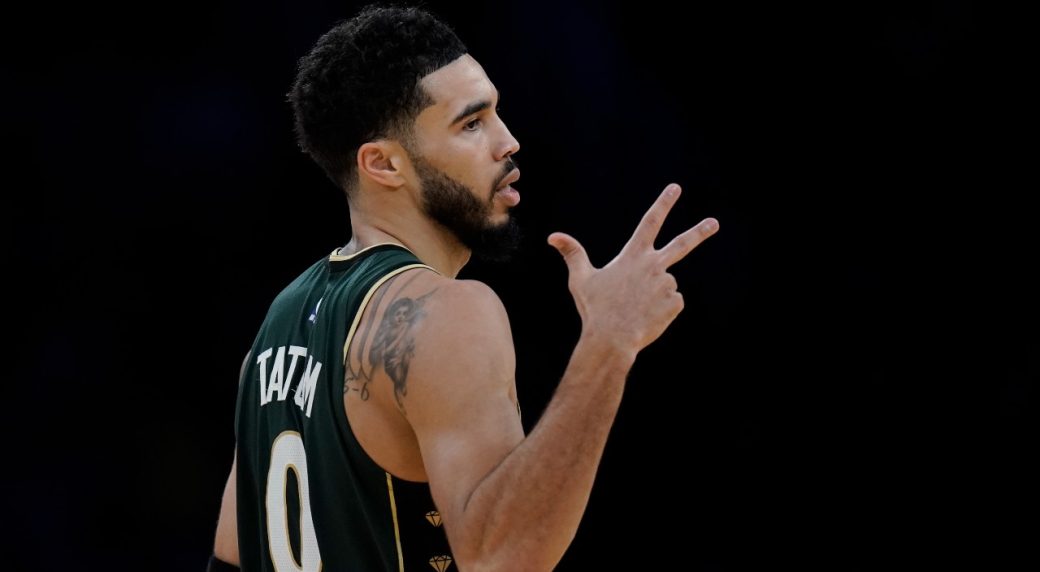 Boston Celtics forward Jayson Tatum has been listed as out for Saturday’s contest against the Toronto Raptors due to wrist soreness, the team said on Friday.


Tatum is in the midst of an MVP-calibre season as the star player on the Eastern Conference-leading Celtics (34-12). He is averaging a career-high 31.2 points, good for third in the league in points per game, while also tacking on 8.5 rebounds and 4.3 assists per contest.

The Celtics took down the Golden State Warriors 121-118 in overtime in a rematch of the 2022 NBA finals on Thursday. The sixth-year forward scored 34 points on 9-for-27 from the field and grabbed a career-high 19 rebounds. They are currently on an eight-game winning streak.

This will be the third game Tatum has missed this season in what has been a healthy year for the former Duke product.

The Raptors, meanwhile, are coming off a close 128-126 loss to the Minnesota Timberwolves on Thursday after giving up a late 14-point lead. They’re currently on a two-game losing streak and sit 11th in the Eastern Conference, five games back of the sixth seed and an automatic playoff berth.

Toronto is playing host to the Celtics, their second matchup this season with the first ending as a 116-110 Boston win on Dec. 5. This is the first leg of a back-to-back with the Raptors set to take on the Knicks at Scotiabank Arena on Sunday.

How many all-stars have Toronto Raptors had?

Eight All-Stars from the Raptors include Vince Carter, Antonio Davis, Chris Bosh, DeMar DeRozan, Kyle Lowry, Kawhi Leonard, Pascal Siakam and Fred VanVleet. Apart from Davis and VanVleet they all have made it to other NBA teams like Leonard.

What is the longest time that the Raptors have been together?

Toronto Raptors is an NBA basketball franchise. The Raptors were an expansion team to the NBA in 1995 along with the Vancouver Grizzlies. In 2001-02, the Raptors became the only Canadian-based NBA team after the Grizzlies moved to Memphis, Tennessee.

Toronto Raptors players Scotiabank Arena for their home games. The Maple Leafs, the city’s NHL team, also use the arena. The Raptors have appeared in the NBA playoffs 13 times since their founding, most recently in 2021, where they lost in 6 games to the Philadelphia 76ers in the first round of the playoffs.

In 1999-2000, the Raptors qualified for their first playoff appearance. The Raptors were swept in round one by New York Knicks, their division rivals.

There were not many fans and the team was not exciting. There wasn't anything to root for, nor was there anyone who cared. The team finally decided to change their image after years of mediocrity and made every effort to appeal to the public.

The team hired an advertising agency to help them create a national marketing strategy in 2001. Their slogan was "Hear Us Roar!"

They used the slogan because the team was in financial trouble at the time and wanted to make sure that everyone knew that they were selling out. All they needed was a catchy phrase and a great logo to go along with it. This is where the creative genius of the agency shines through. They combined "hear me roar" and "never forget to die", a popular saying. This became Toronto Raptors’ official motto.

When did the Raptors beat Chicago Bulls at the ABA?

The Raptors defeated Chicago Bulls on March 24, 1996. They would go on to win the NBA Championship in 1996. Final score: 109-108. Michael Jordan attempted a last second shot to win the Bulls game. However, it was not recorded because it was after midnight.

Who owns the Toronto Raptors?

How did the Raptors win this year's NBA championship?

DeMar DeRozan, Jakob Poltl and a protected 2019 draft pick were traded by the Toronto Raptors to the San Antonio Spurs on July 18, 2018.

The Toronto Raptors' offseason was very exciting. They made two huge trades that caused shockwaves throughout the NBA. DeMar DeRozan, Jakob Poltl and a 2019 first round draft pick (that was not protected) were first traded by the Raptors to the San Antonio Spurs. They received Kawhi Leonard from the Spurs in exchange. Then, they traded Jonas Valanciunas, Delon Wright C. J. Miles, as well as a 2024 draft pick to Memphis Grizzlies for Marc Gasol--another multi-All-Star and former defensive player of the year. These moves placed the Raptors into a formidable position to compete in the NBA title race this season. Let's examine each trade.

Kawhi Leonard's trade to the Raptors was risky but a good move. Leonard is an MVP-caliber player when healthy, and he's a top-5 player in league. His injury last season limited him to playing just nine games, and there is concern about his long-term physical health. The Raptors decided the reward was worth taking the chance and signed the deal. Leonard has been healthy thus far and is playing at an All Star standard. He averages 26 points, 8 rebound, 3 assists, and 49% field goal shooting. His three-point percentage is 38%. If he can stay healthy, he gives the Raptors a real chance to win an NBA title this season.

Marc Gasol made a trade for Marc Gasol, but it was a very short-term one. Gasol is well into his 30s and clearly is past his prime. Gasol is still an excellent player, and he brings valuable experience to the young Raptors. He averages 15 points and 8 rebounds per game. He also shoots 34% from three point range. C.J. Wright and Delon Wright were young assets the Raptors traded. Miles was acquired by Gasol. However, the Raptors believe his expertise will prove to be valuable during playoffs.

The Raptors were off to a good start with a winning 6-0 record. Their 16th win was on November 23rd. The Raptors were cautious with Leonard, resting him for more than 20 games throughout the season to prevent worsening his previous injury. They still managed to secure the 2nd seed East, just behind Milwaukee Bucks.

The Raptors went on to have a successful run in the playoffs, dispatching the Orlando Magic, Philadelphia 76ers and Milwaukee Bucks to reach the NBA Finals for the first time in franchise history. Leonard was named Finals Champion and the Raptors took home their first title.

The Toronto Raptors had a very successful offseason, which has paid off in a big way. The Raptors have two All-Stars and are ready to compete for the title in years to come. They have shown that they are capable of taking risks and making bold moves, even if it means building a championship-level team. It will be interesting for the future to see how they maintain their success.

Why are Toronto Raptors called Raptors

The NBA's expansion into Canada in 1995 saw the founding of Toronto Raptors. Name and logo for the team were inspired from Jurassic Park. The team colours are bright red, purple, black, and silver.

The Raptors finished their first season with a 21-61 record. This was due to the team's inability to find their feet in the league. But the team improved each season and was able to reach the playoffs by 1999.

The Raptors' most memorable moment was in 2019, when they won the NBA championship title. Led by the backcourt duo of Kyle Lowry and Kawhi Leonard, Toronto won their first championship in a thrilling six-game series against the Golden State Warriors.

Since then, Canada's most loved sports team, the Raptors, have been an institution. From international superstars to homegrown talents, Toronto continues to bring excitement to basketball fans around the world.

Canada's proud heritage is represented by the Toronto Raptors. Their success on the courts inspires young basketball players all over the country. The Raptors are a beloved team in Canada thanks to their passion, unmatched style of play and dedication to excellence.

Can I bring my photo camera to a Raptors match?

You will be fine if your plan is followed. It's fine to bring a camera along to an NBA game. It's not illegal. But you do need to be aware of the risks involved.

First, think about whether you have to take photos during the match. The courtside is the best place to get great shots.

You should also check these tips to improve your basketball photos if sports photography is something you are interested in.

The second thing you need to think about is the kind of camera you're going to use. Because if you're planning on shooting action shots or capturing memorable moments with your friends, you will need a professional-grade camera.

Also, consider how much you're willing and able to spend on setting up your shot. For instance, if you're going to shoot hoops with your kids, you may want to invest in a tripod and a remote release instead of carrying heavy equipment.

You must also decide where you will store your gear. You can't just set up shop in the arena and expect that someone will give you a card. Either bring extra batteries, cables and SD cards, or you can find somewhere to store it while you're watching the game.

It is important to plan ahead if you want high quality photos at sporting events. It will allow you to capture amazing images that you can share with others.