Here are five takeaways from the Toronto Raptors‘ 124-115 win over the New York Knicks.1. This had all the makings of another frustrating loss as the .. 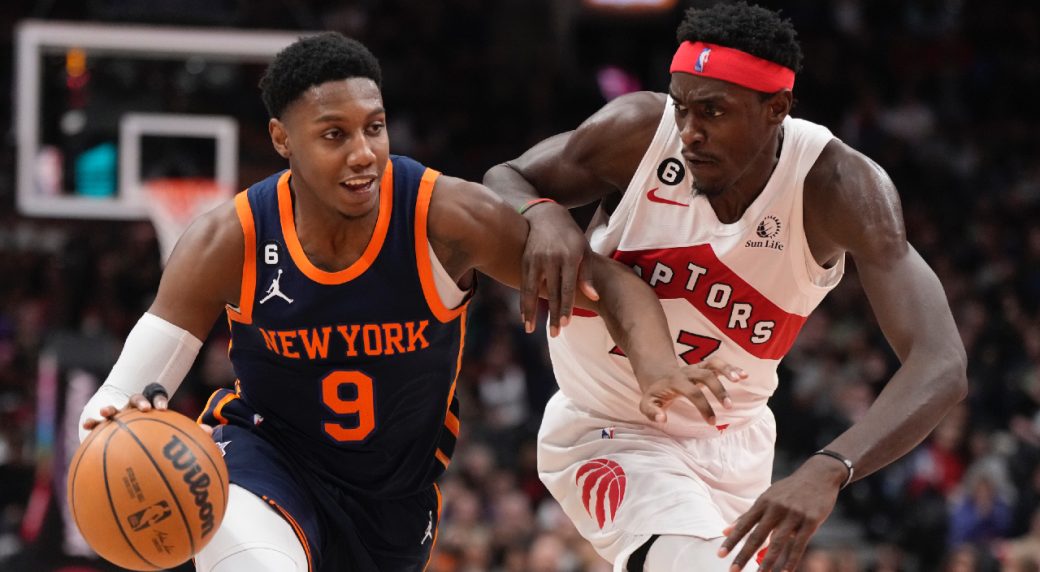 Here are five takeaways from the Toronto Raptors‘ 124-115 win over the New York Knicks.

1. This had all the makings of another frustrating loss as the Raptors squandered a 17-point lead, before the second unit flipped the script. A lineup of Scottie Barnes, Gary Trent Jr., Precious Achiuwa, Chris Boucher and Juancho Hernangomez played with tremendous energy on both ends despite momentum favouring the Knicks who stormed back in the third quarter. It started with defence, as the Raptors confounded New York with their zone defence that stacked multiple bodies in the lane to guard against Jalen Brunson and RJ Barrett’s drives, forcing them into four turnovers which the Raptors converted each trip down. Offensively, they kept it simple with the main option being Trent Jr. attacking off the curl, which produced a three for him and two free throws for Achiuwa rolling to the hoop, or Barnes backing down his defender and crashing the glass relentlessly for putbacks. It wasn’t anything complicated in terms of schemes, but rather it was just a hugely energetic performance by Toronto’s reserves as they played with pace and purpose. Nick Nurse rewarded their efforts by sticking with them through two timeouts, before finally cashing out at the three-minute mark after New York nailed back-to-back threes.

2. Nurse also showed a willingness to extend his rotation in the first half. Nurse gave Jeff Dowtin and Joe Wieskamp extended minutes to start the second quarter, and stuck with them for six minutes despite a poor showing that saw the lead dwindle by seven points during that time. Dowtin struggled to handle New York’s physicality and ball pressure, while Wieskamp didn’t get the proper screens from teammates to pop open, and missed the one catch-and-shoot chance that he got. The plays mostly devolved into Pascal Siakam having to isolate against a set defence, which was the only way to actually keep the group afloat offensively, but it’s still a promising sign that Nurse purposefully extended his rotation. Toronto was playing their fifth game of the week, and on the second night of a back-to-back in which Siakam, Achiuwa, and Barnes all played over 22 minutes in the second half against Boston. It would have been irresponsible and short-sighted for Nurse to stretch his starters thin yet again.


3. Siakam and Fred VanVleet were flowing on offence when they worked in tandem. VanVleet returned from his one-game absence from rib soreness to hang his third 28-point effort against the Knicks (his fourth meeting being a 33-point performance) who continued to foolishly drop back on defence against a willing shooter. VanVleet was able to knock in four threes, including the game-clinching look off a kickout from Siakam, and was also able to get to the rim at times for free throws and layups. Siakam was also steady throughout, and it really helped to not have a prolific shot blocker in Mitchell Robinson constantly lingering in the paint so that Siakam could beat his defender with a strong move and just finish strong instead of trying to then elude the block. Siakam also knocked down three triples which had been a missing element of his game lately where he hit just 1-of-19 in his past five games. Where the struggles came was when the two tried to do too much on their own. Siakam took control in the second quarter with the bench struggling, and VanVleet got out of control with three heavily contested drives where he was assessed a technical for complaining about a lack of bail-out calls. As hard as it may be to see sloppiness and sluggishness from the reserves, they have to find the right balance of when to take over and not do it just as a reflexive instinct each time momentum swings against them.


4. Achiuwa and Boucher were excellent as a tandem, similar to how they played off each other last season. Achiuwa has been slowly ascending since recovering from an ankle injury, and has stacked together consecutive double-doubles as a spot starter in place of VanVleet and O.G. Anunoby. Achiuwa continues to play with relentless force on both ends, and while he can be erratic at times, Achiuwa is making strides in when to attack and how to finish. He drew 10 free throws as a reward for his strong play. Boucher, on the other hand, has been benched a handful of times this season and it remains to be seen if he can Nurse can ever stay on the same page, but this was a classic example of what Boucher needs to deliver in order to earn minutes. He didn’t come in hunting for his shot, and instead attacked the glass for five offensive rebounds and picked off three steals within zone coverage which led to transition chances. When these two are on their game, the Raptors’ shot blocking and rebounding flips from weaknesses to strengths.

5. Nurse had to adjust on defense against Julius Randle with Anunoby sitting out. Typically, they can just assign Anunoby to absorb Randle’s hyperactive bullyball drives, but that task fell to the team at large. Barnes took the primary assignment and did well to wrestle Randle out of his preferred spots, but Nurse made sure to support him by sending hard doubles to trap Randle into making difficult passes, which is a clear weakness in his game. VanVleet shifted to a lesser defensive responsibility in matching up with Quentin Grimes instead of Jalen Brunson, which freed him up to play for steals on the double teams, while wily vet Thad Young continued that role off the bench. New York had 12 live ball turnovers for 26 points.

When was the Raptors first ever playoff win?

Toronto defeated New York 3-2 in their first playoff series. They advanced to the Eastern Conference semifinals under Lenny Wilkens, for the first time in franchise history.

When were the Raptors able to beat the Chicago Bulls.

The Raptors defeated Chicago Bulls (who would win the NBA Championship the following year) on March 24, 1996. Final score: 109-108. Michael Jordan attempted to win the Bulls' game with a last-second shot, but it failed because it occurred after the final buzzer had sounded.

What was the Toronto Raptors' first season?

The Toronto Raptors suffered a poor debut season. They won only 21 games. The 1995-1996 Toronto Raptors' inaugural season in the National Basketball Association was the first season for the Toronto Raptors. Along with the Vancouver Grizzlies, the Raptors were also one of the expansion teams that joined that league. This was also the first NBA-level season.

Isiah THOMAS, an All Star point guard from the Detroit Pistons, became the General Manager. He helped with the draft, which yielded Damon Stoudamire, who would go on to win Rookie of the Year. They also acquired Tracy Murray (and Oliver Miller) in separate trades. Thomas introduced a new primary symbol of a dinosaur playing in basketball and new pinstripe unis with the logo at the front of their jerseys. The Raptors also added red and purple to their color scheme.

Brendan Malone became the Raptors head coach on November 3. They beat the New Jersey Nets at SkyDome to win their debut. But they lost the next seven games.

Murray finished second on team scoring, averaging 16.2 point per game. He was also the leader with 151 3-point field goals. Miller had 12.9 points per game, 1.4 steals, 1.4 assists and 1.9 block per match, while Robertson was responsible for 9.3 points with 4.4rebounds, four assists, two steals per contest off the bench.

Despite having one the worst records in league, their attendance was excellent, at an average of over 17283 per game at SkyDome, now Rogers Centre.

Is it possible to bring my camera with me to a Raptors' game?

You'll be fine as long as you follow the rules. There's nothing wrong with bringing a camera to an NBA game. There is nothing illegal about this. However, you need to be aware about the potential dangers.

You must first consider whether or not you are allowed to take photos during the game. As long as you're sitting near the courtside, you might be able to capture some great shots without having to lug around a bulky DSLR or even a smartphone.

If you are serious about sports photography and want to get more photos to add to your portfolio, you should check these tips for better basketball shots.

You should also consider the type of camera that you are going to use. Professional-grade cameras are essential for capturing action shots and memorable moments with your friends.

It is also important to determine how much time you are willing to spend setting up the shot. Consider investing in a tripod, remote release, and other equipment if you are shooting hoops with children.

You must also decide where you will store your gear. You can't just set up shop in the arena and expect that someone will give you a card. Either bring extra batteries, cables and SD cards, or you can find somewhere to store it while you're watching the game.

You must plan in advance if you want to capture high-quality photographs of sporting events. You will be able to capture great images that you can enjoy for years to come.