Here are five takeaways from the Toronto Raptors‘ 106-104 loss to the Boston Celtics.1. The Raptors continue to lose, but they at least keep it.. 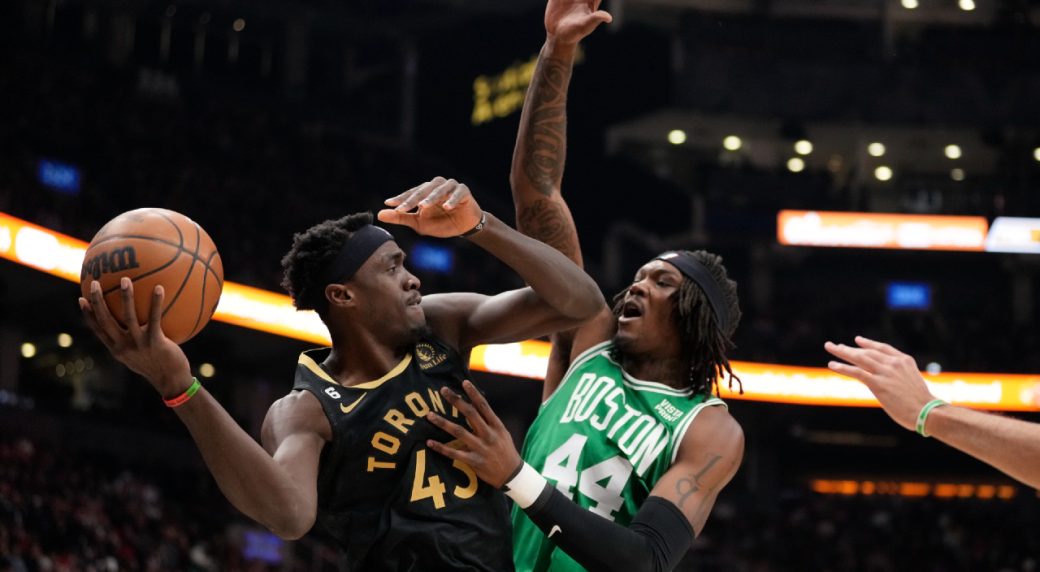 Here are five takeaways from the Toronto Raptors‘ 106-104 loss to the Boston Celtics.

1. The Raptors continue to lose, but they at least keep it interesting. On Thursday, the Raptors lost on a game-winning rip-through foul by D’Angelo Russell which completed a 14-point comeback for Minnesota in the fourth quarter. In their next game on Saturday, the Raptors had a golden opportunity to tie in the final moments, but proceeded to make a comedy of errors. First, Gary Trent Jr. gets past his defender but leaves an open layup short which would have tied the game. Trent Jr. atones for his mistake by stealing the ball back on the ensuing Celtics possession where Toronto trapped Payton Pritchard into throwing an interception. It was another golden chance to tie as Pritchard and Grant Williams were both on the deck as Trent Jr. caught the ball at halfcourt, with Pascal Siakam, Precious Achiuwa, and Thad Young all ahead of the play which surely would have produced a chance at a layup.

Except, the Raptors don’t get to capitalize because Nick Nurse inexplicably calls timeout to stop the sequence. Nurse draws up one of his go-to actions that any competent scout could have predicted — four players in the frontcourt and one in the backcourt as the ball is inbounded to halfcourt to create a running start — and it results in Siakam getting trapped under the basket by Al Horford for a jumpball. Nurse immediately begs for a challenge, and takes the requisite timeout to initiate one, except the rules are that you cannot challenge a non-call or a jumpball, so the end result is just that Nurse wasted both timeouts. Siakam loses the tip to Horford, but Scottie Barnes jumps in for a second chance. Barnes then doesn’t even jump and Celtics win possession. But even then the Raptors had an opportunity as Williams pushes Trent Jr. in the back for a turnover, but Toronto doesn’t have a timeout and failed to conjure a play on the fly to even get a shot at the end. It’s just one gigantic brainfart by the entire team, starting with Nurse.

Stream 250+ marquee NBA matchups from around the league, including over 40 Raptors games. Plus, get news, highlights, analysis, select NBA Playoff matchups and the NBA Draft.


2. It’s such a shame that the Raptors wasted another great performance from Siakam. He didn’t make the last play against Horford, but it was a difficult ask with how much Boston loaded up in the paint against Nurse’s predictable set. Otherwise, Siakam was the main driver behind Toronto’s play as he went 11-for-14 over the course of three quarters to finish with 29 points, 10 assists, and nine rebounds. After an uncharacteristically sluggish week, Siakam rediscovered the touch on his midrange jumper where he nailed six of them while attacking the Celtics on switches. The lowest point in Siakam’s career came against the Celtics during the bubble playoffs of 2020, where he struggled badly due to a confluence of circumstances. Each meeting with Boston isn’t just a tough test against a great set of defenders, but it’s a measuring stick on Siakam’s progress since that point, and it’s encouraging that he’s scored 40, 29, and 29 points in his last three meetings against the Celtics. In tonight’s game, he only made one free throw and still managed to be the leading scorer.

3. Toronto’s second unit was shocking once again. It’s not just that they were outscored 62-14 in bench scoring, because that somehow undersells how dire the situation is. The biggest issue is that the reserves don’t just fall apart, but they have a habit of bottoming out in such a hurry that the starters become stretched. Nurse rode Siakam and Achiuwa for the entire third quarter which produced a four-point lead, then rested them for the start of the fourth. Within a minute and a half, the Celtics had already launched a 9-0 run and forced Nurse to call timeout to bring them back into the game. Boston was without Jayson Tatum, then lost Marcus Smart and Robert Williams at halftime, and still they were able to bring in more quality contributors than what Toronto had to offer. Malachi Flynn was actively bad in his five minute stint, while Chris Boucher also made some truly head-scratching decisions like chasing a block with 0.4 seconds left on Grant Williams instead of just staying vertical on a rushed shot at the buzzer to give him free throws.


4. Achiuwa played his best game since returning from injury. He was a force in his 37 minutes on the floor as he attacked every opportunity on both ends of the floor. Achiuwa has been finishing better both in transition and on the roll, which is a significant positive over last season where he was wasteful with his chances, and he also nailed a stepback three which is another example of his unwavering confidence. Defensively, Achiuwa can truly guard all five positions and has remarkably quick feet for someone who is also able to explode off the ground to collect three blocks. After O.G. Anunoby was ruled out with a jammed ankle, Achiuwa took over the responsibility of guarding Jaylen Brown, and on several occasions Achiuwa was able to run Brown off the line, cut off his drive, forcing Brown to pivot in place, before having to reset to a teammate. Achiuwa is the Raptors’ second-best prospect, and while he is still very much learning the game and prone to mistakes, he plays extremely hard and has the athleticism to contribute consistently. If the Raptors end up moving a starter or two at the deadline, Achiuwa should be first in line to slot into the starting group as he did for 28 games last season.

5. Barnes had a quiet game as the starting point guard after Fred VanVleet was a late scratch due to a rib injury. He opened the game well with two catch-and-shoot threes, a midrange pull-up, and a hook shot, but really faded as the game went on. Barnes couldn’t generate downhill pressure on the rim when starting out from the perimeter with the ball in his hands, and it led to a quieter night as compared to in recent weeks where he had been involved in the pick-and-roll game or stationed at the elbow. Playing the point also took him away from the basket for offensive rebounds, and he wasn’t able to get to the foul line once. Defensively, he had trouble with Malcolm Brogdon, who caught him dropping back for pull-up jumpers while also finding the angle to drive past him for layups. It didn’t help that Nurse played Barnes for every second of the second half, but that’s at least somewhat understandable with Anunoby going down. In the long run, Barnes has all the talent to be both a great initiator and a finisher, but for now his numbers and his impact drops when he is asked to initiate.


Bright spots emerge for Raptors despite another tough loss to Celtics


With trade deadline near, upcoming stretch could determine Raptors’ direction

What does "We The North" mean?

The phrase "We The North," also known as We The North Nation, is an anthem used by the Toronto Raptors. It was written by rapper Drake and producer Noah "40" Shebib.

Drake wrote the song in Toronto while staying with a friend. He finished recording his album Take Care with fellow artist Kanye West. Drake wrote lyrics about his hometown while he was there. He wanted it to be something that could represent all Canadians. The song speaks about unity and pride as well as hope.

Drake began to work on the melody for We The North after he went to London to film the video for his single "Nice For What". He then recorded the instrumental version in one take.

Drake was writing lyrics for the song when 40 suggested the chorus. After hearing the hook, Drake thought it sounded like a great idea and asked if he would record it. They worked together to create the final product.

The official music video for "We The North Anthem," was released on October 5, 2018. It featured Canadian singer-songwriter Shawn Mendes performing along with Drake and other musicians.

When were the Raptors able to beat the Chicago Bulls.

The Raptors defeated Chicago Bulls (who would win the NBA Championship the following year) on March 24, 1996. The final score was 110-108. Michael Jordan tried to win for the Bulls with a last-minute shot but it didn't matter because it came after the final buzzer had sounded.

What was the first year of existence of the Toronto Raptors in 1985?

It was difficult for the Toronto Raptors to make it in the NBA's first season. Brendan Malone was hired by Isiah Thomas to be the head coach. The team quickly acquired many talented players through drafts and trades. They beat the Chicago Bulls once, but overall finished with a 21 - 61 win-loss record.

Toronto drafted Marcus Camby as Rookie-of-the Year in 1996. Camby was also part of the starting team with Alvin Williams at the point guard. Damon Stoudamire was traded in 1997. Toronto continued to make roster changes as it sought to establish a foundation for future success.

Despite all the changes, the team struggles throughout its first few seasons in the NBA. Toronto finally reached the playoffs in 2000, after much rebuilding and transition. But it was defeated by the New York Knicks.

When was the Raptors' first playoff series won?

Toronto won their first ever playoff series, defeating New York by 3-2 in 2001. The team advanced to the Eastern Conference semifinals for only the second time under Lenny Wilkens as head coach.

The best time to go to a Toronto Raptors match

Toronto Raptors games typically take place on weekdays between April and October. Weekends are often reserved for other events, such as concerts and festivals.

Book tickets as soon as possible to avoid disappointment.

Fans then head over to Nathan Phillips Square which is next to the ACC. They stay there until the end of the game.

It is best to attend a Toronto Raptor home game after 8 pm. The stadium is empty before midnight, but fans return to celebrate their team's win.